Help...my Maine Coon Cat is Peeing Outside the Litter Box! 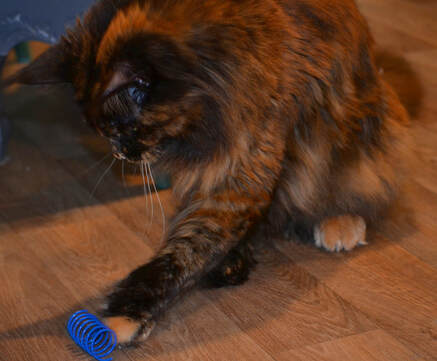 Why is My Cat Peeing Everywhere?
Maine Coons in general are well behaved cats that normally don't have a problem going potty inside their litter box. When they start peeing in the corners, under your bed, on your favorite shoes, it is frustrating and it STINKS! The general rule of thumb is to have at least one litter box available per cat, plus one. So at minimum if you have 4 cats, you need at least 5 litter boxes. If you can, place the litter boxes in various places of the house and on different levels of your house.

Cats are usually trying to communicate soomething to us when they start urinating outside of their litter box. Is the box dirty? Is there a new pet or person in the house? Is there new litter in the box? Is your kitty not feeling well? There is generally a reason that explains why your kitty is refusing to potty in their litter box. Here are a few other reasons your Maine Coon cat may be peeing outside of the litter box: 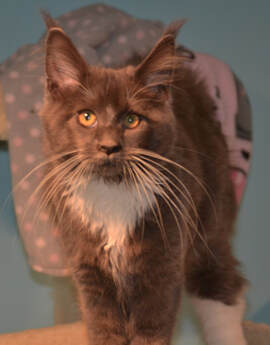 Medical Reasons Why your Maine Coon is Not Using Their Litter Box
If your kitty all of the sudden starts urinating outside of their litter box, it is important to first discuss the problem with your vet. Pet Helpful lists several reasons why your cat is inappropriately peeing outside of their litter box including UTIs, kidney infections or stones, bacterial infections, diabetes, old age, and pain. Your best plan is to get to the vet. Proper diagnosis and medication can help your cat and solve the problem.

Stress
Yes, cats can be stressed out too. They are creatures of habit and like consistency and routine. A new house or baby may really be stressing your kitty out. Home renovations, moving the litter box  or getting new litter boxes can also stress them out. While renovating our basement, our rescue cat Crixus  walked right in front of me and peed in a box. Although he's always been one to poop just outside of the litter box, peeing outside of the litter box was new for him. Upon calling the vet, she asked if anything had recently changed such as home renovations or a new litter box. We were in the middle of renovating our basement and I thought I was doing my cats a favor getting new litter boxes but apparently not! Not only that, but we moved his food bowl which caused him even more stress! After ruling out a medical issue, moving the food bowl back to its original spot, and showing him more love, he stopped peeing in boxes.

An Unclean Litter Box
Have you ever stopped to use a public restroom and it is so disgustingly dirty you'd rather hold it than go? I have. I don't remember the restaurant name in particular, but there's a hole in the wall Taco restaurant in Detroit with a bathroom that is absolutely FILTHY. I'm sure there are new life forms growing on the floor that looks like it's never seen a mop in its lifetime. GROSS! Cat's have feelings too. If they have to go potty and their litter box is disgustingly dirty, they aren't going to hold it. They're going to find a nice, clean place to go to the bathroom. To keep their litter box clean, scoop it daily and add clean litter to the box if necessary. If you have a multiple cat household like us, scooping once a day may not be enough. Cats are very clean animals and don't want to have to go to the bathroom if there is poop or pee in there from another cat.
Also, change the litter box and add clean litter regularly. Once the litter box starts to smell even after scooping, its time to change the box entirely. It's a good idea to sanitize the litter box as well since poop can spread several diseases. Because our cat's have claws, I do not use litter box liners and I dump the entire contents of the litter box in a garbage bag. (Just a word of advise, double bag the dirty litter. I have had a trash bag rip open 6 times now all over our carpeting and it is NOT pleasant to clean it up afterward). I use a very diluted spray bottle with bleach and give the litter box a spray, then spray with water, then dry it before adding new litter.

A Hard to Reach Litter Box
As mentioned previously, cats can be picky when it comes time to using their litter box. Preferably they do not want to go in a deep, dark hallway full of loud noises to go to the bathroom. If they do not feel comfortable venturing down to their litter box, they're not going to use it. It is highly recommended to have litter boxes placed throughout the house on multiple levels. If possible, try using a few different types of litter boxes. Some cats prefer the comfort of a litter box that's enclosed, while others will only use an open top litter box. All cats are different with different personalities and preferences.

Your Cat Doesn't like the Type of Litter You're Using
Cats are very smart and are creatures of habit. From a very young age their mom will show them where to go potty, and they will get used to the type of litter in their litter pan. We prefer Tidy Cat clumping litter here for oue adult cats, but there are several different options available.  Some cats will not use clay litter and would prefer using pine, while the opposite is also true. Because cats can smell better than humans, they may not like scented litter and will refuse to potty in it.

Multiple Pets in the Home
Sometimes with several pets in the home, one of them becomes the dominant one or the boss. Sometimes that can even lead to one cat being the bully of the litter boxes. If this is the case, one of your kitties may feel intimidated and refuse to use their litter box. If possible, try placing multiple litter boxes throughout the house. 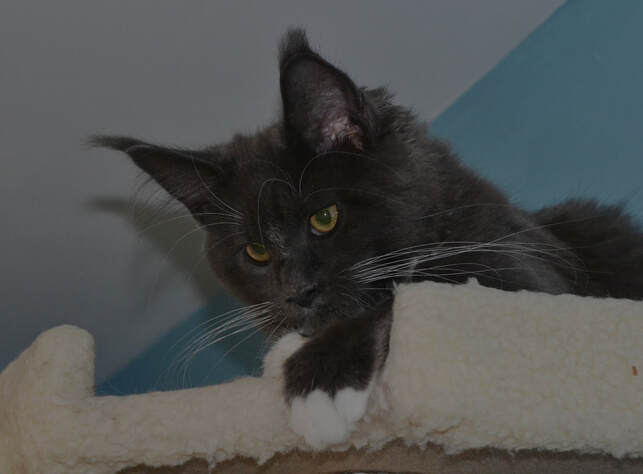