Neutering and Spaying Your Maine Coon 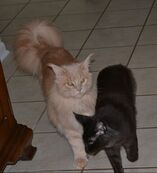 The appropriate age to neuter or spay your Maine Coon is a very controversial issue. Some breeders refuse to sell their kittens without being altered first (to prevent their new owners from breeding them). However, if the spay or neuter is done at too young of an age, it can effect the size of your Maine Coon. Most people would agree that neutering your Maine Coon before they hit puberty is an excellent idea to prevent spraying and behavioral changes, which is typically around 6 to 8 months of age.

What is neutering and spaying?
Neutering is a surgical procedure that removes the testes of male cats or the uterus and ovaries of female cats. Maine Coons need to be neutered before they typically hit puberty. Doing so would minimize unwanted behaviors including urine spraying, aggression, and roaming. Neutering at the right age also eliminates the risk of having an unwanted litter.
Spaying is the surgical removal of a female cat's internal reproductive structures including her ovaries, fallopian tubes, uterine horns, and a section of her uterine body.

Why Neuter?
As a male cat gets older and he reaches puberty, his urine will smell much stronger due to hormones and pheromones beign released when they pee. This odor signals to other cats that they’re ready to mate. Neutering limits these hormones and minimizes the urine’s stench. Even if your already-neutered cat decides to spray later on, it won’t smell as foul.

Spay or Neuter to Prevent Spraying
Most people believe that only male cats spray, or mark their territory with urine. However, females can spray too.
Spraying is also referred to as urine marking and happens when cats release small amounts of urine in or onto their surroundings. For males, spraying is a way to mark their territory. For females, it’s typically to communicate where they are in their reproductive cycle. Spraying also happens when your cat feels anxious or threatened.Urine marking  typically starts at puberty when cats begin to sexually mature. Neutering will minimize your cat’s urge to spray but only if it’s done before they get into the habit.

Neuter to Prevent Aggression
As your kitty grows and matures, their hormones are changing. Because I have children of my own, I like to compare my cats to my kids. It might sound strange but when my son turned 13 and puberty took over, he went from a sweet little boy to a hormonal, roller coaster of emotions teenager. Your kitty that was once sweet and calm may become a terror as he goes through puberty. This typically happens when they’re feeling territorial over space, food, or their mates. This aggression can sometimes be directed at people or other pets.Neutering on time reduces the risk of your Maine Coon developing a permanent attitude problem.

Spay and Neuter to Prevent Health Problems
Most people think that spaying or neutering will cause unnecessary pain for their pet, however the procedure is fairly quick, painless, and has a quick recovery period.  Some cats are even sent home with pain relieving meds to help manage their pain. If you aren't planning on breeding your furry friend, they should be spayed or neutered to prevent health problems. Spayed females will have a lower incidence of mammary tumors and pyometra (an infection of the uterus). Neutering male cats will eliminate testicular diseases. Because spaying and neutering prevents several health problems, altered cats generally live longer.